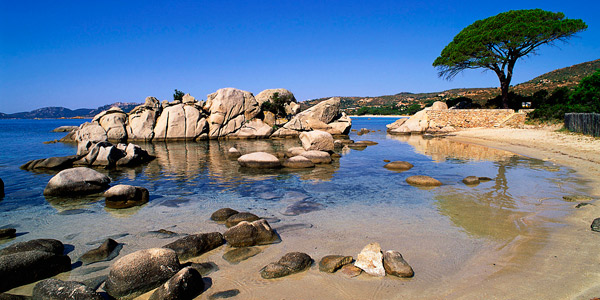 Barely 10 miles of sparkling Mediterranean waters separate the islands of Corsica and Sardinia but despite the proximity, the two offer distinct, unique holiday experiences. One is Italian and the other is French, for a start, but the differences don’t end there.

It’s not for nothing that Corsica is known as the Island of Beauty. It’s home to a wild coastline, mountainous national parks, pine forests, fishing villages and ancient walled towns such as Calvi.

Sunseekers head south to Porte Vecchio, its hillside location overlooks a picturesque bay, and during spring and early summer, the island’s famous blanket of shrubs, maquis, is in full bloom. Corsica’s railway is another draw, covering 180 miles from lively Bastia on the east coast to seaside town Ajaccio on the west. Hikers often stop at Vizzavona village for the GR20, one of Europe’s best walking routes.

Beaches are what Sardinia does best, and holidaymakers attracted to the high-end accommodation and restaurants of the famous Costa Smeralda in the northeast find respite in the resort of Santa Teresa di Gallura. The northwest coast around Alghero offers equally alluring family-friendly white sand beaches and beyond the coast lie traditional villages, forest-covered hillsides, fine cuisine and the lively capital, Cagliari.

Other sights include Sardinia’s mystical stone fortresses, or nuraghi, which dot the island; the archaeological gems at Nuoro; medieval Bosa and the archipelago of La Maddalena.

“Sardinia has more beaches – about 240. There are more festivals on the island, a welcoming Italian feel and it’s richer in archaeological sites.” If you’re still in doubt, a number of operators offer both as part of a twin-centre break.

Corsica is offered by several operators including Thomson, First Choice and Mark Warner. Specialist operator Corsican Places offers the largest accommodation options to the UK market and its collection features more than 130 products, many exclusive to them.

The majority are self-catering properties near the coast, but they also offer rural properties and hotels, with 25 new ones selected for 2011. They initially specialised in northern Corsica, but they have now expanded to the south of the island and the new brochure includes handy Beach and Family Guides.

New properties include the Bergerie Olivella (pictured above) and Bergerie Murtetu, part of the operator’s Premium Collection in Olmeto on the west coast. There are also family-friendly properties such as the traditional Casa Monica villa in Palavesa, outside Porto Vecchio, and Marina Serena, which consists of five modern villas, and is a short drive from Palombaggia and Porto Vecchio. New hotels include the three-star Hotel Costa Salina near Porto Vecchio’s lively harbour.

Rail specialist Ffestiniog Travel has added Corsica to its escorted programme this year with a rail tour through the island’s verdant interior, passing dramatic gorges and waterfalls. Corsica’s single-track railway, which climbs to its highest point at Vizzavona from sea level, is one of Europe’s most picturesque.

Hilton made its Sardinian debut last year with the opening of the Doubletree by Hilton Olbia-Sardini in the northeastern Gallura region, close to Olbia’s historic port. Its leisure amenities include a heated outdoor pool, spa and links to the Robert Trent Jones-designed Pevero Golf Club. Opening in April, La Maddalena Hotel & Yacht Club is in the national park archipelago between Sardinia and Corsica.

This summer will also see the return of the Austin Healey and Will Greenwood Rugby Academy at the family-friendly Forte Village Resort after it launched last year. This complements the Chelsea Soccer School and Five-Star Tennis Academy.

Specialist operator Sardinian Places, specialising in northeast/northwest Sardinia, launched its new brochure in January, featuring nine new properties. While the focus remains on detached countryside villas with private grounds and a pool within easy driving distance of the coast, it is expanding to seafront properties. New this year is the Residence Riva Azzurra, a 21-apartment beachside complex in Cannigione. Plus, for the first time, the brochure features package prices alongside accommodation-only prices.

In addition to these, the operator added two more properties in late February. Both Villa Pineta, a three-bedroom property sleeping six, and Villa Le Saline, a converted three-bedroom traditional-style Sardinian farm-house with a pool, sleeping six, are located in the northeast.

Cresta Holidays has also expanded its Sardinian portfolio, adding five new hotels near the resorts of Palau and Isola Rossa in the north, in addition to those in Baia Sardinia and Porto Cervo. The selection includes self-catering Lantana Residence, Forte Village Resort, and resort and spa properties such as the Pullman Timi Ama, and Valle dell’Erica Resort Thalasso & Spa.

Family specialist Mark Warner has added the traditional, family-run Hotel Perdepera, where half of the 120 rooms are now reserved for Mark Warner guests. New properties in Sardinian specialist Sardatur’s latest, 100-page brochure include the re-opened Monteturri Resort Relais on the east coast and the new Casai Resort on the southwest’s ‘island within the island’ Sant’Antioco.

Managing director Gianni Bonuglia says: “With more flights and accommodation available, Sardinia is ideal for a family holiday; romantic getaway; culinary, historical or cultural tour; or to relax.” The lead-in brochure price is £430 for a seven-night stay at Riviera Hotel in San Pietro in May including return flights to Cagliari, bed-and-breakfast accommodation and transfers.

Other companies featuring the island include Just Sardinia, which sells about 10%-15% of its product through the trade. New this year is the Residence Riva Azzurra. Kirker Holidays, whose options includes the Superior Su Gologone near Gennargentu National Park. Kirker can also arrange tailor-made holidays to both Sardinia and Corsica.

With more low-cost airlines flying to Corsica, access has become easier. Last summer Corsican Places launched a new weekly charter flight from Stansted to Calvi, with Ryanair adding a service from Stansted to Figari, on the southern tip of Corsica and Bmibaby adding summer-only flights to Bastia from East Midlands.

Low-cost and charter flights have also been key to Sardinia’s success. Ryanair’s routes to Alghero and Cagliari are well established and in May 2010 Bmibaby launched summer-only flights to Alghero from East Midlands airport, with easyJet launching a Stansted-Cagliari service.

Having enjoyed great success with its British Airways chartered flights from Heathrow, Edinburgh and Manchester to Cagliari, Sardatur is launching a new weekly Heathrow-Olbia flight for the summer starting on May 21. Sardatur’s Gianni Bonuglia says: “This will considerably open up the market to the north/northeast region, making it more accessible and affordable to the British market.”

Ahead of the move, Sardatur has added 12 new properties, ranging from self-catering villas to five-star deluxe hotels.

Corsican Places offers seven nights at Casa Anna, a two-bedroom apartment in Calvi Citadel from £349, based on four sharing. Price includes return flights from Stansted to Calvi, taxes and transfers, an early booking offer discount of £50 per person and is based on May 22 departures. corsica.co.uk, 0845 330 2345

Cresta Holidays has a seven-night half-board package based on two sharing at the Resort Le Dune & Spa at Badesi Mare near Isola Rossa, Sardinia from £539. Price includes flights from Gatwick to Olbia with easyJet, an early booking discount and is based on departures from May 14-June 17. bctagent.co.uk, 0844 800 7017