Laura French picks out some of the standout shores across Greece and Cyprus.

It’s an unprecedented time for the industry, and the challenges are all too real.

But that doesn’t mean we can’t start looking beyond this to the future, and thinking about where to send clients once things start to calm down.

With that in mind we’ve compiled a guide to the best beaches across Greece and Cyprus to start putting on the radar ready for later in the summer, when appetite for plonking down on a sunlounger with a large G&T (or an ouzo) starts to get back on track.

Here are some of the highlights that will have you feeling inspired and whisk you away to that carefree, happy place without needing to move from your desk.

Curved into the shape of a mushroom, or as the locals say, a Greek omega sign, this naturist-friendly spot in Messinia is something of a local legend. It was described by Homer in his works, and it’s full of other history too, with Nestor’s Cave – a stone archway named after Greek mythology’s King of Pylos – just a 15-minute walk away over the billowing sand dunes. Just above the cave sit the ruins of Paleokastro, a 13th-century, Frankish castle that offers panoramic views over the bay.

“It was described by Homer in his works, and it’s full of other history too, with Nestor’s Cave – a stone archway named after Greek mythology’s King of Pylos.”

Book it: Olympic Holidays offers seven night’s B&B at The Westin Resort Costa Navarino, a 15-minute drive north, from £1,703 per person, including flights from Gatwick and transfers in July 2020.
olympicholidays.com 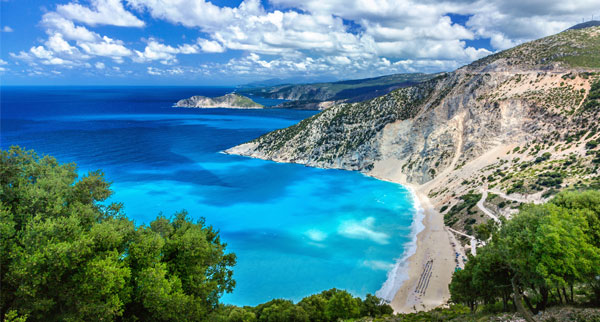 Kefalonia’s most renowned beach is deserving of its reputation, with a hunk of aqua-blue sea and a swathe of white pebbles sandwiched between verdant, dramatic cliffs. Head to the top of the cliff for a bird’s eye view of its electric hues, and stop by one of the tavernas come dusk to fuel up on traditional Greek cuisine as the sun sinks into the sea. Suggest aqua shoes for the pebbles, and pack a beach umbrella if you’re looking for shade.

“Head to the top of the cliff for a bird’s eye view of its electric hues, and stop by one of the tavernas come dusk to fuel up on traditional Greek cuisine.”

Book it: Tui offers nine nights’ B&B at the 3T-rated Hotel Tara Beach, Kefalonia, from £602 per person, based on two sharing and including flights and transfers, departing July 7.
tui.co.uk 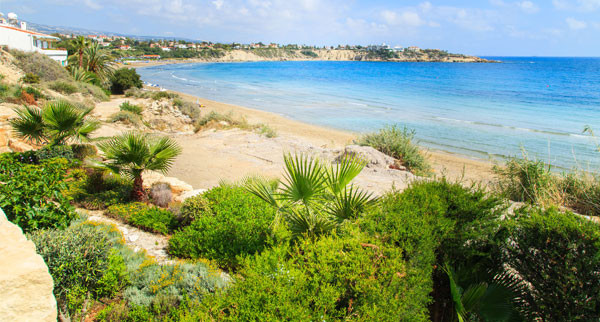 Families will find no shortage of beaches in Cyprus, but for one of the best, look to Coral Bay’s crescent-shaped cove, a 20-minute drive from Paphos. “With golden sand and shallow, crystal-clear water, this Blue Flag beach is the perfect choice for families with young children,” says Lauren Ross, product and commercial manager for Europe at Travel 2. It’s also a hotspot for watersports, with banana boats, pedalos, jetskiing, waterskiing and diving all available, while the town itself offers lively, resort-style restaurants and bars for those wanting to let their hair down a little.

“It’s also a hotspot for watersports, with banana boats, pedalos, jetskiing, waterskiing and diving all available.”

Book it: A week at the five-star Coral Beach Hotel & Resort starts at £869
per person, based on two sharing on a B&B basis with return private transfers and flights on September 15.
travel2.com 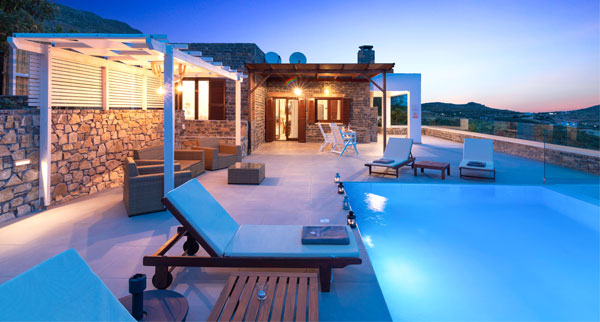 Fancy a spa treatment? Hop on over to this gem, where clay rocks line the shore and locals come to bathe and benefit from its healing properties. It’s one of a row of unspoilt beaches that make up Xerokambos, an arid, mountainous coastal settlement in the southeast. Other highlights include Vourlia, a gold-sand, rocky bay lined with a handful of tavernas, and Alatsolimni, a sandy beach set in front of wildlife-rich wetlands.

“It’s one of a row of unspoilt beaches that make up Xerokambos, an arid, mountainous coastal settlement in the southeast.”

Book it: Simpson Travel offers a week’s self-catering at Villa Kambos, set on a hill a few minutes’ walk away, from £737 per person based on four sharing, including flights and car hire, departing September 29.
simpsontravel.com 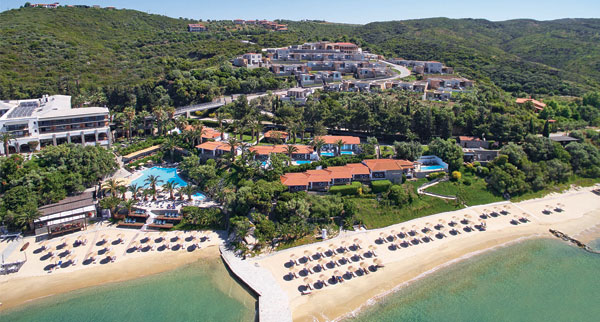 If soft white sand, calm clear water and total seclusion appeal, look to the private beach at Eagles Palace Hotel, recommends Peter Cox, purchasing manager for Greece at Classic Collection Holidays. “The sea has almost perfect clarity, the beach has Blue Flag status and the thatched beach parasols have a bar service button so you don’t even have to move from your sunlounger,” he says. It’s set on the Mount Athos peninsula amid rolling green hills and exotic-looking palms, with the uninhabited island of Drenia a quick ferry hop away, and the ancient village of Ouranoupolis close by too.

“It’s set on the Mount Athos peninsula amid rolling green hills and exotic-looking palms, with the uninhabited island of Drenia a quick ferry hop away.”

Book it: Classic Collection offers seven nights’ B&B at Eagles Palace from £1,430 per person in high season, based on two adults sharing, including
flights and private transfers.
classic-collection.co.uk 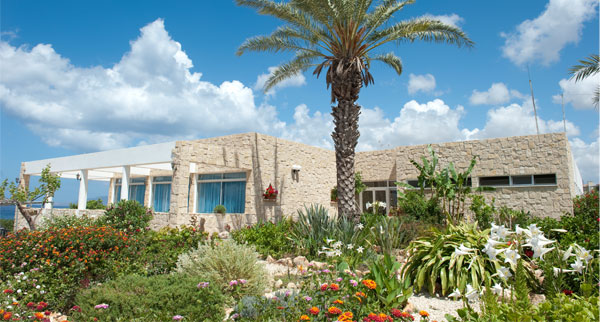 Direct clients after a bit of R&R to this stretch of soft gold sand in Polis, says Stella Proctor, travel consultant at Sunvil. “This long, remote beach is quiet and organised with sunloungers and a small taverna,” she says. Located on the northwestern coast, it’s a pebble’s throw from the Baths of Aphrodite, where the Greek goddess of love is said to have bathed, and the Akamas Peninsula, where hiking, biking and more await active types. It’s also a nesting area for turtles and a popular spot for monk seals, so add it to the list for wildlife enthusiasts.

“Located on the northwestern coast, it’s a pebble’s throw from the Baths of Aphrodite, where the Greek goddess of love is said to have bathed.”

Book it: Sunvil offers a week’s B&B at the nearby, family-run Aphrodite Beach Hotel from £889 per person based on two sharing with flights and car hire in July.
sunvil.co.uk 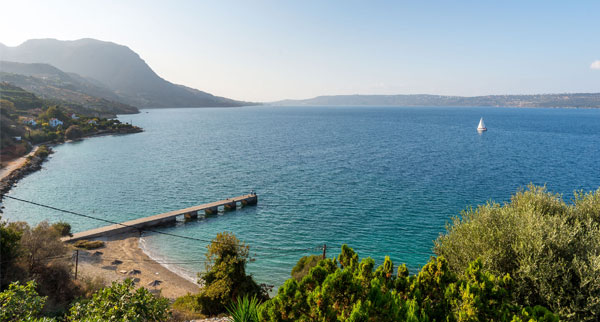 For a hidden-away spot that still feels like something of a secret, try the tiny hamlet of Kalami, says Louise Killner, sales and operations manager for Pure Crete. “The bay here is popular with local fisherman and it’s relatively unknown to tourists, with an access road that isn’t signposted,” she says. “There’s a cantina selling freshly squeezed juice from the surrounding orange groves, and some days there’s also souvlaki grilling on the barbecue.” The beach itself is pebbled with a handful of tamarisk trees and parasols dotting its shore, while close by sits a harbour where small, sleepy yachts bob gently on the ripples.

“There’s a cantina selling freshly squeezed juice from the surrounding orange groves, and some days there’s also souvlaki grilling on the barbecue.”

Book it: Pure Crete offers seven nights at Katerina’s Penthouse, which is half a mile from Kalami, from £1,293 on an accommodation-only basis, based on a July 1 departure.
purecrete.com 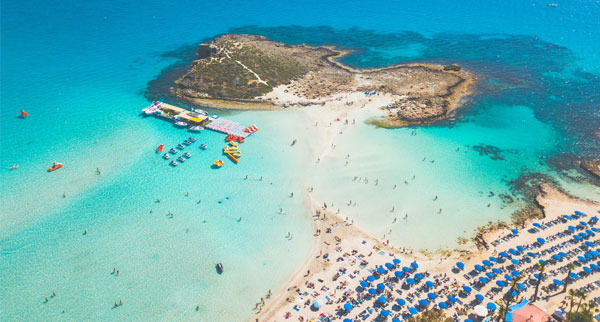 It’s not only about lying around on sunloungers, of course. For younger clients after a livelier vibe, few places beat Ayia Napa’s famous Nissi Beach, where daytime beach parties bring crowds flocking with DJs and dance contests in front of the cerulean sea. There’s also a sizeable watersports offering for those looking to get active, with everything from parasailing to flyboarding, jetskiing to banana boating, while quieter sections further up the beach add appeal for anyone wanting something a little calmer.

Book it: Cyplon Holidays offers a week at the five-star NissiBlu Beach Resort from £979 per person, based on two sharing a Superior Room Side Sea View with breakfast and including private transfers and flights on September 27.
cyplon.co.uk

• Porto Katsiki, Lefkada: Set among lush emerald hills and white stone cliffs, this Blue Flag beach is reached by a series of steps downhill, with swimming, sailing and surfing among the rewards at the bottom. “It’s truly mesmerising and especially popular for adults looking to sunbathe with an incredible view,” says Elena Ahmadian, marketing executive for Cyplon Holidays.

• Lara Bay, Cyprus: Best-known as a nesting site for green and loggerhead turtles, this quiet, oft-deserted spot on the Akamas Peninsula is a dream for nature enthusiasts, with a peaceful stretch of sand lining the blue sea and a turtle conservation centre on hand.

• Agios Ioannis, Mykonos: Islands of Greece recommends this beach just outside Tinos town for silky-soft sand and crystal-clear water backed by chilled-out beach bars and tavernas. “The picturesque chapel that stands on the left side of the beach is also worth a visit,” says Zoe Cornwall, sales and marketing manager at Visions Holiday Group.

All hotels in Cyprus are closed until April 30, under restrictions imposed by the Cypriot government last week. Tourists were instructed to leave by March 21. On March 17, the Foreign Office advised against all non-essential overseas travel for an initial period of 30 days. Read the latest information at: gov.uk/ foreign-travel-advice

Discover the glamour of the Athenian Riviera, Greece
The best short-haul summer all-inclusive deals
There’s more to Sunny Beach than meets the eye