It’s not easy securing client loyalty in these strange times but delivering Malibu has raised some spirits says The Travel Snob, David Walker a homeworker for Not Just Travel based in Nottingham.

While families are making the most of lockdown by spending time together, those on their own are drinking their way through boxes of wine, Zoom-calling friends, dancing to 1980s songs and playing drinking games (yes, I’ve been there).

But how are we travel agents maximising this time to ensure our clients come back to us?

The obvious thing to do is to call customers with upcoming bookings. I’ve called those of mine that have a booking until the end of the year at least twice now, and am starting a third round of calls. This is having a double benefit as I’ve picked up future bookings as well as rebookings.

Now that we’re starting to get through some of the refunds, it’s important to make sure those who have been refunded spend that refund money on a trip with us.

To do this, I’ve tried to be a little bit creative. In normal times, we might seek to enhance a trip by popping a note or a bottle in a customer’s room. Now, after a holiday has been cancelled, I’ve been sending things to customers at home the day after they were due to fly, just so they know I’m thinking of them.

For example, families going to Disney over Easter have received Disney jigsaws – something they could do together as a family.

Two families who were supposed to be heading off on safaris (and who both have rebooked for October) received stuffed animals.

For couples who had been due to head off on anniversary trips, I’ve had bottles delivered to their homes with notes wishing them congratulations on the occasion.

“I sent them a bottle of Malibu and we enjoyed an hour-long Zoom call, for which I wore an Hawaiian shirt and drank cocktails with them and joined in the fun.”

And I’ve sent bouquets of flowers to honeymoon couples on the day of their cancelled weddings. 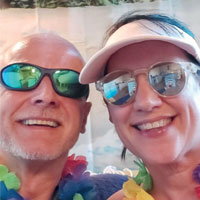 One half of one couple, who were due to celebrate their first anniversary at Sandals, sent me a schedule he’d prepared for his ‘Sandals week at home’. This included jerk chicken, ‘Bob Marley cocktails’, water aerobics without the water, and so on. It was so well done. I sent them a bottle of Malibu and we enjoyed an hour-long Zoom call, for which I wore an Hawaiian shirt and drank cocktails with them and joined in the fun.

After our call, he posted pictures on his social media accounts. One reply to him read: “You get all this and we can’t even get hold of Tui?” I’ve since had several enquiries for future trips from his contacts.

I’ve been overwhelmed by the amount of messages I’ve had from clients checking in on me, and the gifts I’ve received for working with them over cancellations and rebookings. A case of Cloudy Bay arrived with a note saying: “Sorry you’ve probably lost all the commission on our cancelled holiday – we know you’d spend it on wine, so hopefully this will make up for it.” I love my clients!

“I’ve been overwhelmed by the amount of messages I’ve had from clients checking in on me, and the gifts I’ve received for working with them on cancellations and rebookings.”

I’ve also been giving customised advice to my clients for future trips based on their own situations. Yes, it’s great to get a rebooking or credit note in the bag, but is that better for us or for the client? I’ve found that advising customers to choose the option that’s really best for them is what’s most likely to win their loyalty.

I’m happy to hit a third of target

A few customers who have had refunds paid into their accounts have already booked alternative holidays with me. Even so, I’m thinking more about future bookings for the lifetime of a client than I am about losing the commission on the next booking. But how long will this all go on for? Who knows, but as long as we stay strong and creative, we’ll get through it.

“I’m thinking more about future bookings for the lifetime of a client than I am about losing the commission on the next booking.”

Bookings last month included a safari in October, New Year ski trips worth £36k (thank you) and the rest were all for travel in 2021 with the exception of two Orlando holidays for 2022.

I made a third of my target, but in the current climate I’d say that’s pretty good going.