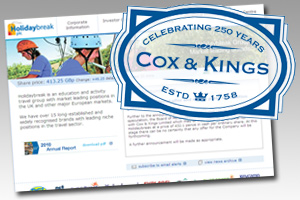 Cox & Kings has pledged to honour the existing rights of staff at Holidaybreak assuming its £312 million takeover of the company goes ahead.

The offer document issued to Holidaybreak shareholders states: “Cox & Kings intends that the existing rights, including pension rights of the current employees of Holidaybreak will be fully safeguarded.”

It notes: “Cox & Kings recognises that Holidaybreak’s existing employees will be key to generating value in the future.”

Referring to Holidaybreak management, the document says: “Cox & Kings recognises the strength of the existing management team and the importance of that team for the future development of the businesses. It is important to Cox & Kings to retain and work with that team.”

The Holidaybreak board agreed to recommend the takeover to shareholders on Wednesday, with those holding one-third of shares in the company already signed up to the deal.

The takeover is set for completion by late September. UK employment legislation protects the rights of employees transferred between companies during a takeover under the Transfer of Undertakings (Protection of Employment) Regulations or TUPE. The legislation offers protection for a year after the transfer.