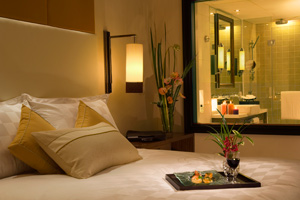 The company acquired a hotel construction site in Tokyo’s Ginza district last month in a move described by chairman Kwek Leng Beng as illustrating its “capacity to act quickly when we identify attractive strategic opportunities”.

“We further strengthened our financial position in the first half of the year and continue to seek out and analyse investment opportunities that will add value for shareholders. Trading in the current period to date is encouraging and in line with management expectations.”

Revenue for the three months to June 30 was up by 3% to £196 million. However, the company was affected by the continued closure of three hotels in New Zealand following the earthquake in Christchurch in February.

One leased hotel is to be demolished, and remains closed until the end of 2012 and the third will not be able to take bookings until May 2012.

The company announced that subsidiary CDL Hotels is to sell land next to the Grand Millennium hotel in Kuala Lumpur, Malaysia, for £43.6 million. This is likely to result in a pre-tax profit of £35.4 million after transaction costs.