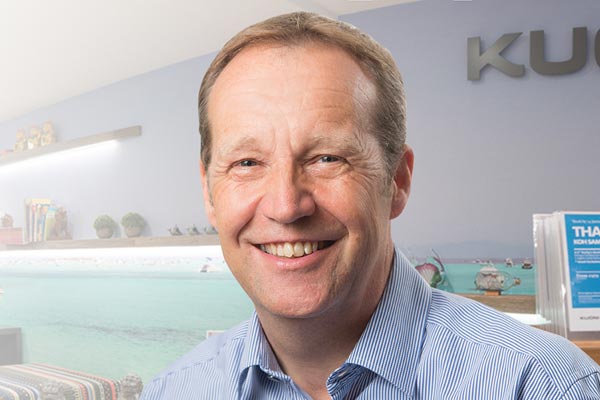 The boss of Kuoni is considering launching a petition to encourage the government to introduce a travel equivalent of the Eat Out to Help Out initiative.

Derek Jones said the travel sector desperately needed the government to step up and give consumers confidence to book holidays for next year.

He tweeted to suggest a voucher or discount-based scheme for travel which would be similar to the Eat Out to Help Out initiative which was announced by chancellor Rishi Sunak in his mini-budget this week.

The Eat Out to Help Out scheme means diners get 50% off restaurant bills, with the discount covered by the government.

Jones has suggested the government should offer 10% reductions, up to £100 per person, on any holiday booked by the end of the year as a way to “get the overseas holiday business up and running again”.

To support the travel industry and the people who work in it I’m saying ‘Go Away to Save the Day’.

So I’m calling on @RishiSunak for the month of August to give you a 10% reduction, up to £100 per person, on overseas package holiday bookings. #PlanForJobs#GoAwayToSaveTheDayhttps://t.co/cg2RkWOQWE

Speaking to Travel Weekly, Jones, said his tweet had been “tongue in cheek” and was “born out of frustration for the lack of support the outbound travel sector had received”.

He said he believed this would “genuinely give the mainstream sector a tremendous boost”, adding that he had considered launching a petition for his ‘Go Away to Save the Day’ idea.

“The eat out initiative gives people confidence to get back out to restaurants and it’s an inducement to change habits. We need the government to say they are confident that holidays in 2021 will go ahead and here’s some sort of discount to encourage you to book.

“We’re not saying travel now – we’re saying book your holidays now for next year. I think this would genuinely give the mainstream sector a tremendous boost.”

He said the industry was struggling and desperately needed tailored support from the government,  highlighting that many businesses were restructuring, making redundancies and some had gone out of business.

“My tweet was tongue in cheek, don’t get me wrong, I didn’t expect Rishi to call me up and say he was doing it,” he said. “But this isn’t about encouraging people to travel immediately, we at Kuoni aren’t booking people for travel this summer, we’re focussed on summer 2021 holidays and honeymoons, but we need stimulus now to get people to book next year’s holidays and this idea would help.

“I’ve been considering doing a petition about it for members of the travel industry to sign.”