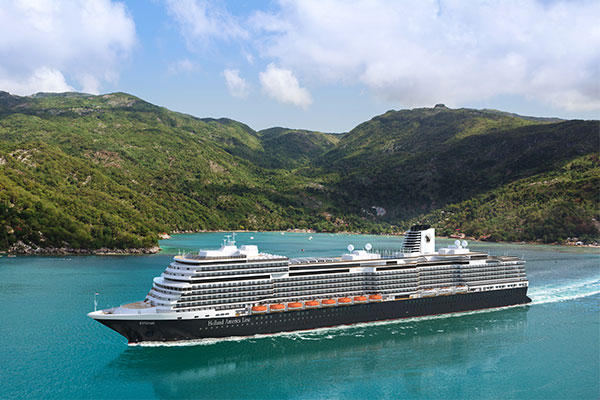 Departure ports include Amsterdam, Piraeus, Barcelona,  Civitavecchia – the port for Rome – and Venice.

Rotterdam will be joined by Nieuw Statendam, Westerdam and Zuiderdam, putting two Pinnacle Class ships in the region.

Zaandam heads to Europe on a 35-day ‘Voyage of the Vikings’ sailing from Boston and back in July, with a segment departure from Rotterdam.

The five ships will run itineraries ranging from seven to 35 days in duration, as well as longer Collectors’ Voyages up to 29 days between April and November.

They will visit the Baltic, British Isles, French and Spanish rivieras, Iberian peninsula, Mediterranean and Northern Europe including Greenland, Iceland, Norway and the North Cape.

New vessel Rotterdam sails a seven-day ‘premiere voyage’ from Venice to Rome on August 1 and then moves into a season of Northern Europe cruises from Amsterdam.

The ship will then offer three seven-day itineraries to Norway, one 14-day Baltic cruise and one 14-day Norway, Iceland and British Isles voyage.

A transatlantic crossing completes the ship’s inaugural Europe season with a 14-day sailing from Amsterdam to Fort Lauderdale.

Westerdam and Zuiderdam will be deployed in the Mediterranean sailing a combination of longer 11- and 12-day cruises from Civitavecchia, Venice, Barcelona and Athens visiting Istanbul, Mykonos, Monte Carlo, Koper in Slovenia, Limassol and Rijeka in Croatia.

HAL last month extended its pause of cruise operations and cancelled departures on all ships until December 15.

President Gus Antorcha said: “Our guests miss cruising as much as we do, and as we move closer to getting back to doing what we do best, we want everyone to feel confident in planning their European travel with us for next summer.”