Only 11% of Brits plan to travel abroad in the next six months, down from 17% at the start of July, according to YouGov research at the end of September.

Domestic holidays are more popular, with one third of people (34%) planning a trip within six months. But a drop of 12 points in this figure since July suggests that the end of summer and growing coronavirus restrictions are dampening domestic demand too.

However, hope is not lost. While few people are booking holidays, YouGov data suggests travel companies can win over more customers with targeted campaigns even with the current restrictions and that new policies on testing may make travel easier.

YouGov research found two thirds of Brits (64%) would be willing to take a coronavirus test at the airport when returning to the UK – and this might soon be a reality with the government indicating trials could start at Heathrow within weeks.

But previous delays with testing and the UK’s track and trace programme suggest it’s still too early to celebrate.

In the meantime, about half the respondents in our survey (48%) say they would be willing to take a test upon arrival and self-isolate for a day while awaiting the results.

That means that destinations like the Azores and Madeira are an option which may have slipped under the radar.

Crucially, one third of the public (32%) appear willing to travel to destinations that would require them to quarantine for two weeks when returning.

However, self-isolating for a week at the destination is non-negotiable for most people. Only one in six (17%) would sacrifice a week of their holiday in quarantine.

Who should you target for international travel?

The people who still feel confident to travel abroard, even as a new wave of coronavirus makes planning difficult, are likely to be younger, male and professionals.

Londoners are more confident, with one fifth (19%) expecting to go abroad in the next six months.

Social grade matters too: 14% of ABC1s who tend to be professionals have travel plans. This compares with 8% of C2DEs who often do manual work.

This could be because ABC1s are more likely to be able to work from home, meaning it’s less of an issue if they unexpectedly have to quarantine when coming back to the UK. 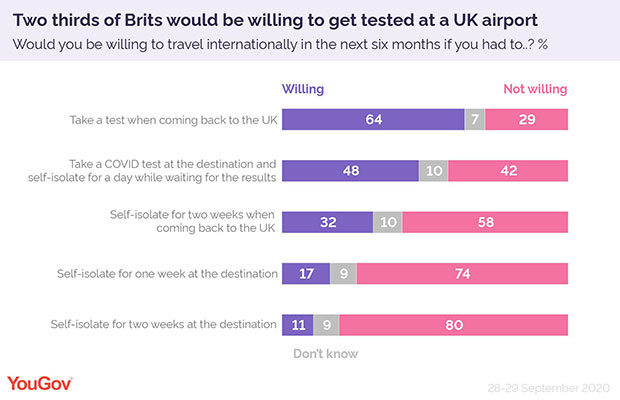