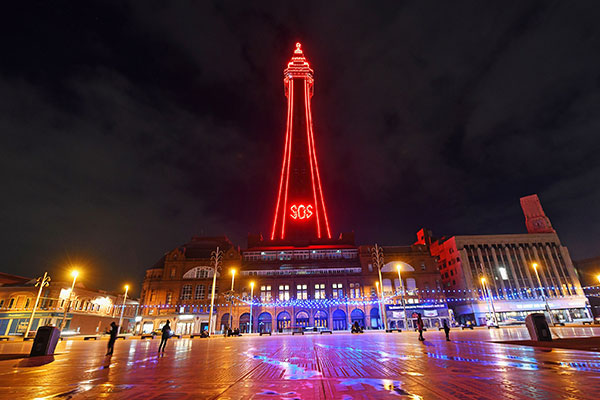 Tourism businesses in Blackpool are urging Boris Johnson to step in and save the resort from “irreparable damage”.

Tier 3 restrictions have resulted in mass cancellations of hotel and attraction bookings in the two most critical weeks of the tourism season.

Dozens of businesses are at risk of closure with the subsequent loss of hundreds of jobs unless the government intervenes.

The illuminated heart on the Blackpool Tower sent out an SOS message to highlight the plight of the tourism industry.

More than 1,000 firms have signed an open letter to the prime minister, which was delivered to Downing Street yesterday (Thursday).

The letter states that the tourism economy is the economic lifeblood of the resort, worth £1.6 billion and supporting more than 25,000 jobs.

They argue that the timing of the Tier 3 announcement could not have been worse, falling on the eve of the October half-term holidays, a period that can account for up to 20% of total annual income for some businesses.

The announcement, which gave just eight hours’ notice of restrictions coming into effect, created chaos and confusion with  people unsure as to where they could travel, leading to a collapse in consumer confidence.

Hotels and guest houses that should have been full during October half-term lie virtually empty as a direct consequence.

Claire Smith, president of holiday association Stay Blackpool, which represents around 200 independent hotels and guest houses, said: “Announcing Tier 3 restrictions on a Friday afternoon at the start of a half term holiday week shows a complete lack of understanding of how a tourism economy works.

“It created total chaos with visitors not knowing where they could go or what they could do when they got here.

“The end result was cancellations on a scale that none of us in the hotel industry have ever experienced before.

“The accommodation sector is a vital element of Blackpool’s tourism economy and unless something is done immediately, parts of it will never recover.”