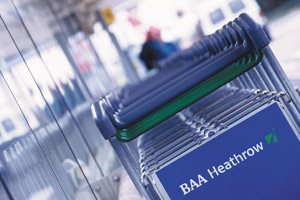 A boost in pre-Easter traffic helped push passenger numbers at BAA airports up by 4% to 8.6 million passengers in March.

The increase means that the London airport saw more than 70 million passengers over a 12 month period for the first time. It passed the 60 million mark in 1998.

But a drop in domestic flights led to numbers at Stansted, Edinburgh and Southampton dropping by 4.7%, 2.8% and 1.7% respectively.

Glasgow recorded a 4.6% increase while Aberdeen achieved a double-digit increase of 10.2% which reflected a rise in domestic oil-related traffic.

North Atlantic traffic was up 13.6% with other long-haul traffic up 5.2%, BAA said today. The group’s biggest market, European scheduled traffic, was up 3.2%.

European charter traffic had strong results across individual airports due to a good ski season in Europe.

Traffic from Heathrow to the BRIC countries also saw growth, with an increase of 62.3% in traffic to and from Brazil.

“Increases in load factors drove this; however Heathrow continues to operate at 99.2% capacity – placing constraints on airlines’ ability to introduce new flights to the emerging economies which are so vital to UK economic growth.”