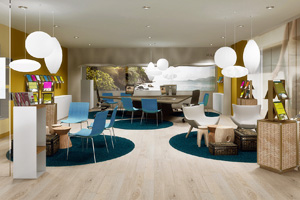 Kuoni has signed a partnership deal with John Lewis to develop travel agencies in four of the high-street retailer’s department stores around the country.

It has now launched a recruitment drive for staff at the stores, which will range in size from 444 sq ft to 821 sq ft, and combine the look and feel of both brands. They will include plasma screens and iPads, which already feature in some of Kuoni’s own shops.

As a result of the deal, Kuoni will recommend John Lewis travel insurance to customers through its call centre, shops and online. Kuoni staff will receive an “introducer” fee if their recommendations result in a sale. Third-party agents who are dual-branded Kuoni partners could also recommend the insurance.

Kuoni’s wedding and honeymoon brochures will also feature in the wedding gift list section of John Lewis’ 29 department stores. Customers who book a Kuoni honeymoon will be able to feature it on their gift lists so that wedding guests can contribute towards the couple’s holiday.

The instore concession stores would be expected to have a turnover similar to Kuoni’s own 21 high-street shops, said managing director Derek Jones. “For us the key advantage of this deal is the brand awareness; much of our high-street presence has been about raising awareness. The John Lewis customer base is very similar to the Kuoni customer base so having our brand associated with John Lewis gives us additional, signficant visibility.”

The performance of the instore concession stores will be reviewed after 12 months and could ultimately result in the roll out of Kuoni stores across John Lewis’ portfolio of department stores. As with Kuoni’s high-street shops they will sell its sister brands such as Kirker Holidays and Carrier.

Jones added: “The plan is to create a long-term partnership. After 12 months we will take a decision on the future expansion of the stores. There are still some gaps in our own shop portfolio and we may plug those gaps with John Lewis concession stores. There is a commitment for more than one year.”

The stores will be situated near to restaurant and cafe areas within John Lewis. John Lewis product services manager Rob Martin said: “People will be able to take time out from speaking to a personal travel expert to shop or have a coffee and choose their holiday in a relaxed and inspiring environment. Kuoni’s commitment to customer service and expert advice was a perfect fit for John Lewis.”

The deal means John Lewis has pulled out of its existing travel partnership with tour operator Cox & Kings. Launched in 2006 under the name Greenbee.com, this was set up as a white-label tie-up with Expedia, with product supplied by Cox & Kings, to target John Lewis credit card holders.