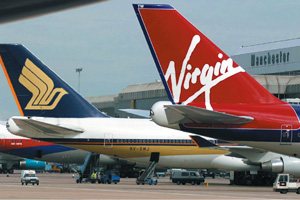 A probe into how fuel ran out at Manchester airport has started after flights returned to normal yesterday.

A total of 13 flights were delayed – 12 for less than 30 minutes and one for two and a half hours, according to the airport.

A further 17 departures from Manchester were forced to stop at other UK airports to top up fuel before completing their onward journeys.

The majority of airlines travelling to Manchester carried enough additional fuel to complete both legs of the journey, the airport said.

“Airlines and fuel companies will be working together to review the incident, learn lessons and mitigate any risk of disruption that might be caused by a similar incident in the future,” a statement said.

The initial interruption to the fuel supply from the Essar refinery on Merseyside was caused by “production problems” and occurred early on Wednesday morning.

Aviation fuel stocks ran out at 5.15pm on Wednesday.  Despite initial concerns that a new supply would not be available until midnight, the refinery was able to begin pumping fuel again at 5.30pm.

Three million litres was supplied to the fuel storage facility at the airport, meaning that operations returned to normal at 8.30am yesterday.

The airport’s operations director Chris Formby said: “Although we initially warned about the potential for some cancellations and diversions based on the information from the fuel companies yesterday afternoon, disruption to passengers has been kept to an absolute minimum thanks to the airlines and the Essar refinery.

“On behalf of the thousands of passengers, we would like to thank our airline partners for the huge effort they put into contingency planning to mitigate the highly unusual problem with the fuel supply.

“Although it was only a relatively small number of people affected, we are also grateful to those passengers who were delayed this morning for their patience and understanding.”