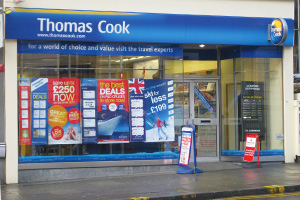 The blaze in the building housing Thomas Cook’s store on Hanover Street, Edinburgh, burned for more than 12 hours after the alarm was raised in mid-afternoon on Thursday.

The four-storey building was evacuated and no one reported hurt. Buildings around the shop also had to be emptied. About 60 firefighters were called to the fire at its height.

The blaze appears to have started on the ground floor at the back of the building and not in the Thomas Cook store. But the shop filled with smoke and firefighters had to run hoses through the store.

Thomas Cook said six staff were on duty when the alarm was raised.

Staff have been redeployed to three neighbouring stores and customers are being redirected to these.

A fire investigation team has examined the scene after Edinburgh City Council building control declared the building safe despite damage to offices and flats in the upper storeys. A spokesman for Lothian and Borders Fire and Rescue service said the fire was not being treated as suspicious.

A council spokeswoman said: “We’ve found no major structural damage so we will be handing the building back to the owners.”

A Cook spokesman said: “The property team is looking at the shop today.”