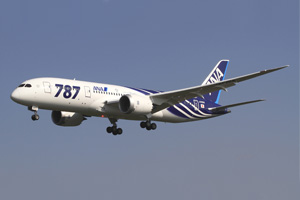 All Nippon Airways grounded five of its 11 Boeing 787 Dreamliners after tests revealed a risk of engine corrosion.

Three of the new generation twinjet aircraft have been fixed and are flying again.

The other two are waiting for parts from Rolls-Royce and could be out of action for a few weeks, a spokesman for the Japanese airline told Reuters.

The engines on the ANA 787s, Trent 1000s, were supplied by Rolls-Royce, which said it was replacing a component on a number of its engines.

“We have identified that a component on Trent 1000 engines fitted to Boeing 787 Dreamliners has a reduced service life. As a proactive measure, this component is being replaced in a number of engines,” a Rolls-Royce spokesman said.

ANA was the launch customer for the much delayed 787 and is the only carrier operating the aircraft with Rolls-Royce engines.

A Rolls-Royce spokesman said there were 287 firm orders for 787s with Trent 1000 engines.

Boeing said it was aware of the findings made by Rolls during engine testing that revealed the corrosion. “We don’t expect timing of any deliveries to be affected by this,” a spokesman said.