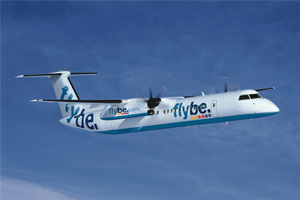 Flybe admitted facing the most challenging conditions in a decade as it reported a half year pre-tax loss of £1.3 million.

This was down from a profit of £14.3 million in the same period last year despite revenue remaining stable at almost £341 million.

Flybe in the UK saw passenger number reduce to 4 million in the six months to September, down by 200,000.

“The UK domestic aviation market has seen passenger numbers reduce by 20.6% since 2007, UK Air Passenger Duty increased by 160% over the same period and fuel prices are at record annual highs.

“Through a relentless focus on revenue growth, cost control and improved efficiency, Flybe continues to seek to counter the challenging market conditions across the European regional aviation sector.”

“Flybe UK will continue to monitor trends closely and review its flying programme to ensure that capacity remains optimally matched to demand,” the airline said.

Chairman and chief executive Jim French said: “The continuing challenges of the UK domestic aviation market further validate the importance of our decision to focus Flybe’s long-term strategy on rebalancing our route network by growing our European operations.

“The UK domestic aviation market continues to show little sign of recovery, with the market trending a year-on-year decline.

“Since this represents 75% of Flybe UK’s passenger base, this decline continues to pose challenges on our UK business.”

He added: “APD continues to be a burden to the industry and one that impacts disproportionately on Flybe compared to those with significant operations outside of the UK.

“We are actively lobbying for some changes in this area although we recognise this will be a long term project.”

French revealed that a range of cost saving initiatives over the next 12 months were being investigated, targeting an annual saving of £2 per seat.

He added that its joint venture with Finnair in Finland has continued an “impressive trajectory of growth”.

“I am encouraged by the continuing dialogue that Flybe Europe’s management team are having with other parties seeking similar arrangements,” French said.