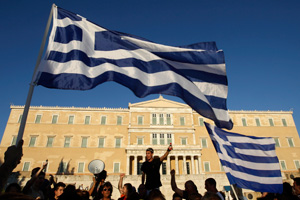 Flights to Spain and Greece face disruption tomorrow (Wednesday) due to a general strike.

The walkout has been called by the European Trade Union Confederation in protest against austerity measures.

It said the strikes and demonstrations were likely to affect different countries at different times, with Spain and the Canary Islands beginning a 24-hour strike at one minute past midnight on Wednesday morning, local time, and workers in Greece taking action from 3pm.

Affected passengers will be given the option of a refund or a seat on an alternative flight.

“EasyJet are proactively trying to minimize disruption; however, we would like to warn customers that they could experience delays to their travel plans,” the airline said.

“We advise passengers planning to travel on November 14 to keep checking our website for updates.”

Iberia has cancelled more than 200 flights scheduled for Wednesday, and British Airways expects disruption to its services.

The Foreign and Commonwealth Office updated its advice for travellers to Spain, warning of “significant disruption” to public transport and services at Spanish airports.

Britons are advised to check for delays before travelling, allow extra time for journeys, and to steer clear of demonstrations.