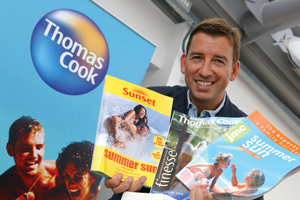 Thomas Cook is to reveal a new UK management structure after it was announced chief executive of the retail joint venture Simon Robinson is set to depart from the business.

Staff have been informed that Joanna Wild, who resigned in July but will now remain with the company, is to expand her responsibilities to include the wider Thomas Cook Co-operative Travel (TCCT) business. She will report directly to UK chief executive Peter Fankhauser.

Fankhauser is to reveal more details of the management restructure shortly. He said: “As we shape our future with a new structure for the UK, I’m delighted to announce that Joanna Wild, who has led our retail business since 2010 and played a vital role in the creation of the retail joint venture, will expand her responsibilities to include the wider TCCT business from next month.”

Robinson, who will leave at the end of November, was tasked with heading the joint venture after Ian Derbyshire quit the company in August last year.

Commenting on Robinson’s departure, Fankhauser added: “I’ve been working closely with Simon to understand how we can align TCCT more closely with the wider UK business and simplify the UK’s management structure.

“I would like to thank Simon for his leadership in laying the strong foundations for what is now the largest travel retail operation in the UK. We wish him all the best for the future.”

A protégé of former chief executive Manny Fontenla-Novoa, Robinson is a former director of retail sales and executive director of independent travel. He was an executive at Thomas Cook ahead of the merger with MyTravel in 2007 and spent some time as managing director of e-commerce in 2010.