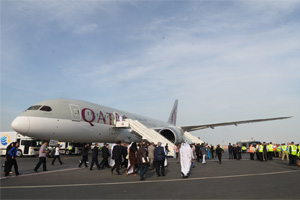 Qatar Airways started daily Dreamliner services between Heathrow and Doha this morning, operating the first scheduled service to and from the UK with the Boeing 787.

The first scheduled flight was due to arrive at Heathrow at 11:05 this morning and depart for Qatar Airways’ Doha hub mid-afternoon at 3:05pm.

The service is one of five the carrier operates daily between Heathrow and Doha.

The aircraft, already in service in Japan, is forecast to transform the experience of long-haul travel.

Qatar Airways has had three 787s delivered in the past month and expects at least a fourth before the end of the year.

Yesterday the carrier announced the second route on which the aircraft will operate, Doha-Perth.

The 787s will be paired between Heathrow-Doha and Doha-Perth to provide an all-Dreamliner service on the route between London and Perth.

The Perth 787 service is due to begin on February 1, with the carrier having launched daily flights to the city at the start of December.

Al Baker said: “Qatar Airways took delivery of the first of 60 Dreamliners last month, with the third joining the fleet just days ago.

“The airline is firmly on the global aviation map as a carrier with a determination to continue its expansion.”