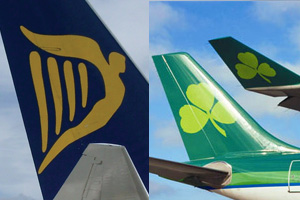 Ryanair responded that the state has no power to block its bid despite Dublin holding a quarter share in Aer Lingus. Ryanair already owns 30% of Aer Lingus.

The European Commission is due to rule on Ryanair’s €694 million bid for Aer Lingus early next year.

It is the third time the airline has attempted to take full control of Aer Lingus, having seen its first bid turned down by the Commission in 2007. Ryanair subsequently dropped a second offer in 2009.

The Commission last month issued a list of objections, but Ryanair offered new concessions to Brussels, including selling some of Aer Lingus’s landing slots at Heathrow to British Airways.

Ireland’s transport minister Leo Varadkar said: “The Ryanair offer and at least the remedies that are being reported are not sufficient in our view, so we won’t support their bid and, in addition, won’t co-operate with their remedies package.

“The Commission will make its own decision, but we have given our views and they are around connectivity, competition and employment.

“We don’t see any advantages for Ireland in what’s being proposed and we see very significant potential risks.”