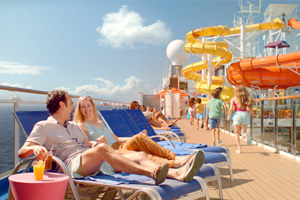 Watch the TV ad and find out how you could win a 9-night cruise for two!

Carnival Cruises will embark upon its first TV ad campaign in the UK with a prime-time slot this month.

Adolfo Pérez, managing director of Carnival Cruise Lines in the UK and Ireland, said: “The big message is that we are committed to the UK, we have substantially invested in the UK and our goal is to grow the market and develop business for our agent partners.”

Pérez said Carnival decided against merely tweaking the line’s US ad for the UK market.

“We could have saved money but we want to grow our presence in the UK and wanted to do it the right way and do something specifically for the UK,” he said.

After being told by creative agencies that the ads should avoid the word ‘fun’ because the British don’t like ‘organised fun’, Pérez said they ended up incorporating the word after all to publicise their Fun Ships, but emphasising that passengers have the freedom to do what they want.

The main aim was to inject humour into the ads, he said.

“Our goal is not just to take market share from competitors or even our sister companies – our goal is to drive people into the offices of our travel agent partners,” said Pérez.

Watch the TV ad and find out how you could win a 9-night cruise for two!