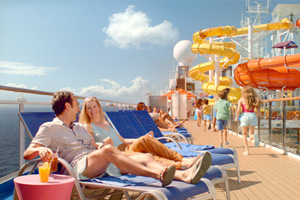 Agents have welcomed Carnival Cruise Lines’ move to add a call to action to contact agents at the end of its new TV advert, after an error meant it was initially missed off.

Agents were unhappy that the original ‘Switch on the Fun’ UK advert, which first aired on January 6 and is the first TV ad campaign Carnival Cruise Lines has run in Britain, made no mention of them.

Speaking before the ad was altered, Ian Warren of GoCruise said: “I looked at it and thought yes, it would be nice if it had said ‘go and see your travel agent’, but at least it doesn’t say ‘contact us on our website’.”

Carnival said it was never its intention to leave off the trade call to action.

Adolfo Pérez, managing director of Carnival Cruise Lines UK, said: “We had always intended to have the travel agent call to action at the end of the advert.

“Unfortunately there was an oversight and an earlier version of the advert was broadcast, which didn’t include any calls to action.

“We apologise to travel agents for this error, but want to assure them that we rectified the issue as soon as was possible.”

He added: “We look forward to continuing to build on the excellent relationship we have with agents across the UK.”

Nicholas Lee, managing director of Broadland Travel in Norfolk, said he was pleased the advert was changed. “It’s good when a company listens and reacts as it shows that even if they made an error, they think about the trade,” said Lee.

“It shows that Carnival wants to support the trade.”