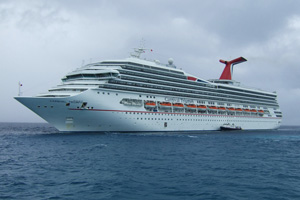 The stranded Carnival Triumph is to be towed to a US port rather than one in Mexico as it has drifted on strong currents, according to owners Carnival Cruise Lines.

The ship was left without power due to an engine room fire on Sunday morning and is now not expected to arrived in Mobile, Alabama until Thursday.

The vessel was on a four-day cruise from Galveston in Texas when the blaze broke out on Sunday morning local time leaving it drifting in the Gulf of Mexico.

An original plan to get the ship towed to the port of Progreso in Mexico was abandoned overnight.

Company president and chief executive Gerry Cahill said:  “We had originally planned to tow the ship to Progreso, Mexico, the closest port to the ship’s location early Sunday.

“Since that time, the ship has drifted about 90 miles north due to strong currents.

“This now puts the ship nearly equidistant to Mobile, Alabama and given the strength of the currents, it is preferable to head north to Mobile, rather than attempt to tow against them.”

The first of two tugboats arrived last night and was tied up to the ship with a second expected in the early hours of this morning.

Public and cabin toilets are operational in certain sections of the ship, power has been restored to a limited number of elevators, and some power in the Lido dining area is providing hot coffee and limited hot food service, according to a statement from Cahill.

He added: “We now expect to arrive in Mobile sometime on Thursday, roughly the same time the ship would have arrived in Progreso given the distance the ship has travelled.

“From there, we will provide the necessary transportation to get our guests home. Mobile also provides simpler re-entry, particularly for the 900 guests on board travelling without passports.

“We have maintained constant contact with the ship’s officers. All of our guests are safe, and we’re doing everything we can to make them as comfortable as possible.

“The ship has maintained emergency generator power since the fire occurred and the technical team on board has been successful in gradually restoring auxiliary power to operate some basic hotel functions.”

Passengers will receive a full refund for the cruise, along with transportation expenses.

They will also receive a future cruise credit equal to the amount paid for this voyage, as well as reimbursement of all shipboard purchases during the voyage, with the exception of gift shop and casino charges.

Cahill said: “We’re terribly sorry for the inconvenience, discomfort, and frustration our guests are feeling. We know they expected a fantastic vacation, and clearly that is not what they received.”