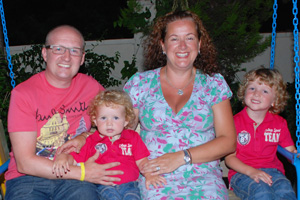 Six months after the death of toddler Reuben Graham, his parents talk to Juliet Dennis about the progress of their plans to build a £1m respite centre to help other families

Creating a respite centre for children with life-threatening illnesses from not just across the UK but across the world is a dream that is gradually becoming more of a reality for Nicola and Mike Graham.

Their son Reuben died of a rare, aggressive brain tumour on August 21, 2012. The day is etched in their memories and will forever be replayed in their minds.

While no one can tell them why Reuben was taken from them, Nicola has come to accept that in some way it is her destiny to create a place for families like hers.

“People say children choose their parents. I feel my career has led to this point. The picture is so much bigger than us,” said Nicola, trade relations manager at Red Sea Holidays.

The registered charity has already gained a level of support that Nicola and husband Mike, who works for Celebrity Cruises, could never have imagined.

“We never imagined it would be this big so soon,” added Nicola.

While the fundraising continues apace – there are more than 25 events planned between now and July – the family, helped by friends involved in running Reuben’s Retreat, is already researching what type of property and facilities would make the best possible respite centre.

Their aim is for the centre to be able to cater for four families at a time while also offering recreational facilities for children, including animals, and an outdoor play area.

Nicola and Mike hope to buy and convert a suitable property near their home in the northwest of England, but the dream is to provide somewhere for children from around the world.

Reuben’s godmum, Ali Rothwell, who  is the charity’s project manager, said: “If there was a child coming to the UK for treatment for three months who needed a break, they could stay at Reuben’s Retreat for a  few nights.”

Talks are scheduled with five experienced charities as well as oncology specialists to draw up plans for a state-of-the-art centre for children with life-threatening illnesses.

“We will look at these other charities, including hospices, and see how they work,” added Ali.

For Reuben’s mum Nicola, the task is never far from her thoughts. “You never switch off and this is something to focus on,” she said.

Charity to appeal to big business to meet £1m target

Reuben’s Retreat is to approach larger companies for backing after attaining charitable status.

“Having charity status means we can appeal to businesses and pitch to them for support,” said Ali.

Up to now, social media, in particular the charity’s Facebook page, plus the fact Reuben’s parents are well known across the industry, have encouraged scores of people to run fundraising events from cake sales to sports events.

Mike said: “People knock on our door with money for Reuben’s Retreat. What I would love is for as many travel firms as possible to make Reuben’s Retreat their charity for the year.”

Nearly £18,000 was pledged at Travel Weekly’s Globe Travel Awards. “We would like to thank everyone, and urge those who have yet to action their pledge to do so,” added Rothwell.

Individuals are also being urged to sign up to easyfundraising.org.uk/causes/reubensretreat for free so that every time they shop online, money will be donated by registered retailers to the charity.

The target of £1 million by the end of July 2014 may still seem a long way off but Mike added: “I don’t want to be flippant but we will achieve it.”

The fund would not only pay for a building and its fitting out but also the running costs for the first year. Mike added: “The £1 million will be a nod to Reuben to say ‘we did it, kid’.”