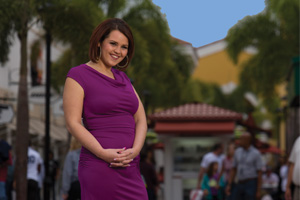 Cover Star Nicolette Shepherd’s dream when she left school was to work as cabin crew.

But at 16, she was too young to sign up for an airline job and instead took a post at her local independent travel agency.

And once she had begun work as a travel consultant there was no turning back. After five years at her first job she moved to Preston Travel Centre in 2009.

Despite being made redundant in January after cutbacks, Nicolette is determined to stay in the trade and hopes to find another travel agency role.

“I just love being a travel agent,” says Nicolette, 25, who was encouraged by a previous Cover Star to enter Travel Weekly’s contest for 2013.

At the time she had just lost four stone, dropping to 11 stone after ditching chocolates and crisps from her diet and walking three or four miles three times a week for a year.

“I felt more confident in my job as a result and I wanted to be a Cover Star because it was a chance to go to Orlando,” she says. “I’d never been on a long-haul flight and when I was selling Orlando it was hard to know what was best to suggest to customers.”

For Nicolette, who grew up spending her summers in Greece while her parents worked as disc jockeys, flying on long-haul Virgin Atlantic flights was almost surreal. “Travelling premium economy on Virgin Atlantic was absolutely fantastic – it was out of this world. And that was before we even landed at Orlando!”

As a movie buff, Nicolette was itching to go to Universal Studios.

“The highlight of the trip for me was Universal Orlando Resort. I’m a film fanatic so it was the perfect place to go. I tried out pretty much all of the rides,” says Nicolette.

Combining a trip to the park with the chance to go shopping at two Orlando Premium Outlets shopping centres meant she could indulge in her other passion – shopping.

“I was in my element,” adds Nicolette, who admits she nearly “fell off her seat” when told she was being given money to spend on jewellery of her choice at the Ultra Diamonds shop.

Nicolette had such a good time she’s already keen to return.

“It was fantastic. I want to go back and take my mum and dad.”

Forced to pick her favourite attractions, she says Twister…Ride It Out and The Wizarding World of Harry Potter topped the bill.

The Twister ride gave an insight into how the film was made, including a re-enactment of a tornado scene and filmed presentation by the lead actors.

“I loved it. It is one of my favourite films,” she says.

Nicolette, a huge Harry Potter fan, was also very impressed by the attention to detail at her other favourite attraction, from a recreation of Dumbledore’s office to a room with moving paintings in it.

“It was just like the film. It really was out of this world,” says Nicolette, who couldn’t resist going on the ride twice.

She adds: “We also had a VIP guide who told us all about the rides.”