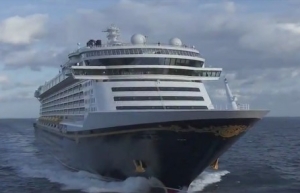 A four-year-old boy was airlifted to hospital after being found unresponsive in a swimming pool on a Disney Cruise Lines ship.

The unnamed child was discovered on the Disney Fantasy on Saturday afternoon.

It was the second similar incident in a month for the company which does not have permanent lifeguards at its pools, the Daily Mail reported. Warnings are posted by the side of the water that lifeguards are not on duty.

A 13-year-old from Missouri died after he was found at the bottom of a pool at Disney’s Pop Century Resort, near the Epcot theme park in Orlando on March 10.

Disney Fantasy was briefly docked at Port Canaveral at the time of the incident.

After the boy was discovered Disney staff gave him medical attention. The boy was then airlifted to Arnold Palmer Hospital for Children in Orlando.

A spokesman confirmed: “On Saturday afternoon, our medical personnel responded when a child was unresponsive at one of the pools on the Disney Fantasy.

“The child was quickly transported to the hospital and is receiving medical treatment.  Our focus is on assisting the family, and our thoughts are with them during this difficult time.

“The ship was at Port Canaveral when the incident occurred.”