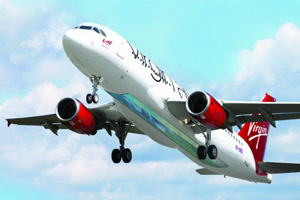 The carrier said it was “flying in the face of ordinary” by announcing a “world first” in aircraft innovation to coincide with the start of flights between Heathrow and Aberdeen on April 9.

“The aircraft will look identical to the standard Airbus A320 that is currently being used on Little Red’s domestic routes, but will have a clear strip made from aviation-standard glass in place of the traditional aisle,” the airline said.

“This ensures the aisle in the plane’s underbelly is completely see through, allowing passengers to look down directly as the plane makes its journey through the sky.”

Sir Richard used his blog and twitter feed to promote the spoof story.

“I’m thrilled to announce that Virgin has created another world-first with the introduction of the technology required to produce the world’s first glass-bottomed plane,” he said.

“I am incredibly proud of yet another aviation breakthrough which has been years in the making. I can’t wait to experience the first flight for myself with my family and other natural born explorers.”

He added: “2012 was a year of celebrating what is brilliant about Great Britain and I’m excited that in 2013 we are continuing this uplifting spirit by developing an experience that will enable Little Red passengers to appreciate the beauty of the British landscape. And with an unrivalled view of Scotland I hope this gives Scottish tourism an even bigger boost.”

The April 1 joke came as Little Red started flights from Manchester to Heathrow on Sunday, followed by an Edinburgh route on Friday (April 5) and Aberdeen four days later.