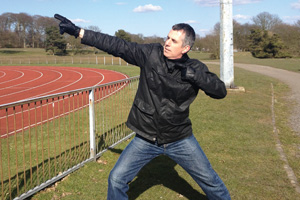 Usain Bolt has been a household name in the UK since winning three gold medals at the 2008 Olympic Games in Beijing. Four years on, Bolt had everyone glued to their TV sets when he repeated the trick at the London 2012 Games.

But Global Coach Tours managing director Geoff Monk had his own reasons for becoming a Bolt fan after a phone enquiry from a customer in Canada last year.

As 60% of his agency’s escorted tours bookings are made by customers overseas, a call from Canada was not unusual. But it wasn’t until the second phone call that Geoff realised the ‘Mrs Bolt’ on the booking was in fact Usain’s mother.

“The man doing the booking was a friend of Usain Bolt. He was booking a tour for himself and two others, including Usain Bolt’s mum, around Europe after the Olympics,” says Geoff. “I wasn’t hugely into the Olympics but after that I made sure I watched Usain Bolt and I have become a fan of his on Facebook!”

Geoff booked the trio a London to Rome highlights tour with Trafalgar and separate travel to meet the tour in Paris instead of London so they could fit in one last morning at the Olympics before they left. “In this business, service is everything,” adds Monk, who has already been contacted by the same customer to discuss another tour.

Since appearing in Readers’ Lives a year ago, Geoff’s escorted tours online agency has expanded. He has launched the Rivercruisetours.co.uk website, published monthly newsletters, increased social media activity and more than doubled agent registrations to 60 on Seeyourtravelagent.com. That site, a separate business, puts consumers in touch with specialist agents using Skype video calls.

There is no doubt escorted tours are becoming more popular, according to Geoff, who now employs wife Sue and sister-in-law Carolyn Williams to help run the growing agency. “Touring is green, and prices don’t vary enormously – unlike packages – depending on whether it’s school holidays,” he says.

“My brother is a Simon Cowell lookalike and we’re doing another with a Gordon Ramsay lookalike,” he says.