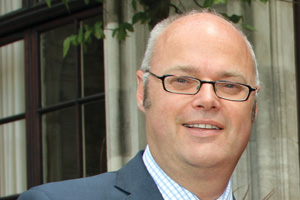 Shipping boss speaks of his sadness at the disbandment of the PSA as cruise and ferry sectors steer separate courses. Lee Hayhurst reports

Passenger Shipping Association chairman Simon Johnson admits to a sense of sadness at being the last and shortest-serving holder of the post in its 55-year history.

But as the organisation prepares to disband on May 1, ahead of a new era for the UK cruise and ferry industry, he looks back on his nine months at the helm with the satisfaction of a job well done.

Johnson, whose day job is passenger services director at P&O Ferries, is a self-confessed ‘ferry man’, but has delighted in cruises’ remarkable rise in recent years.

And it is this rapid rise to prominence that effectively spelt the end of the PSA as the cruise industry sought to forge a single global organisation to represent its interests and train sales agents.

On May 1, Ace, the trade training arm of the PSA, becomes Clia UK and the bulk of its ferry responsibilities transfer to the UK Chamber of Shipping.

Due to the expanded role of Clia UK, which will be the core European office in the world’s second-largest cruise market, no one will lose their jobs.

The PSA offices, close to Oxford Street in London, will be kept on for Clia UK under the leadership of Ace director Andy Harmer.

He will be joined by Rob Ashdown, the first secretary-general of Clia Europe, who will spend much of his time lobbying in Brussels from where, along with Washington, most legislation will emanate.

Johnson, who ordinarily would have served the full two-year term as chairman before handing the role to Jo Rzymowska, UK general manager of Royal Caribbean, said: “I knew there would be change that we would have to deal with. We said there had to be clarity about who does what.

“It had to be clear otherwise it’s a waste of resource. There was a review being done by Clia (US) of members worldwide and what came out was a need for cruise companies to have one voice.

“Our members felt that was right and fair because cruising had grown up. Go back 55 years and basically cruising was on its knees and ferries were the dominant force.

“Over 55 years the whole market has changed. We are getting up to two million cruise passengers and the share is approaching 50:50 UK port departures versus fly-cruises.

“In ferries there has been the Channel Tunnel, duty-free changes, the high cost of fuel and consolidation. Bigger operators survived and ended up owning the busiest routes.

“It’s still big business – 37 million passengers annually in the UK – but it’s been flatlining and been under more and more pressure, especially through the recession as freight collapsed.

“The PSA model we have in the UK was something Clia wanted to establish elsewhere. We’ve had great success with Andy and Ace, the training programme, cruise expos and the convention.

“We have seen good associate membership with Ace, which now has 88 members bringing in vital revenues. But there was no other organisation that had ferry and cruise together.”

Given the timescale – the process started only last August – Johnson said the transformation had gone really well.

“Quite quickly we have found an amicable solution that will give a boost to cruises and is a logical solution to support agents,” he said.

Some of the sadness that surrounds the demise of the PSA revolves around what Johnson described as its ‘family’, the patriarch of which for 19 years has been director Bill Gibbons.

The changes see him retire although he will act as a consultant to the UK Chamber of Shipping on the National Ferry Fortnight marketing initiative.

Gibbons was sure to be given the warmest of send-offs this week as he attended his final industry events as director, including his leaving party in London.

“All the great and the good are coming,” said Johnson. “The PSA has been like a family.

“It has grown up and evolved and there is a lot of pride in what we have achieved in the shipping industry, despite all the challenges.

“There will be a tear in a few people’s eyes because it’s a great pity that the PSA has gone.”