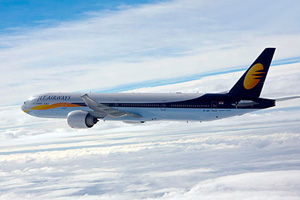 Etihad Airways is gaining a presence in the burgeoning Indian travel market by taking almost a 24% stake in Jet Airways.

The $379 million investment is the first by an overseas carrier in an Indian airline since ownership rules were relaxed.

Jet Airways will establish a hub in Abu Dhabi and expand its reach through Etihad’s global network while the airlines will also expand existing operations and introduce new routes between India and the Gulf region.

The deal involves Etihad investing an additional $150 million in Jet’s frequent flyer programme and spend $70 million to buy the Indian airline’s three pairs of Heathrow slots through a sale and leaseback agreement announced in February.

Etihad’s chief executive Jame Hogan said: “It is expected to bring immediate revenue growth and cost synergy opportunities, with our initial estimates of a contribution of several hundred million dollars for both airlines over the next five years.

Jet Airways owner Naresh Goyal will hold 51% of the airline after the deal.