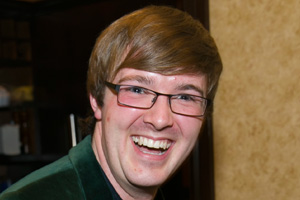 Thomson agent Nick Louis is so enthusiastic, little could have stopped him from applying to become a Travel Weekly Coverstar.

“I wake up every day in a good mood. The girls at work say they are not ready for me first thing in the morning; it drives people bonkers,” says Nick, 25.

So when he saw the chance to sign up for Travel Weekly’s annual Coverstars trip, he didn’t need any encouragement.

“When I read on the Thomson intranet you could go to Orlando for free and all you had to do was submit a photo and get people to vote for you – I thought that can’t be right,” admits Nick, whose previous jobs in hospitality meant he had a large pool of Facebook friends to support him.

Nick, who became an agent almost by accident because he wanted a job with more sociable hours, adds: “When I got through it was all a bit of a whirlwind. I’d been a travel agent for less than a year and here I was going to Orlando. I wanted to go because I’d not been since I was young and it’s not as easy to sell it if you can only remember it as a 13-year-old!”

Nick’s previous jobs in hotels and restaurants meant he took a keen interest in the accommodation and meals on the Coverstars trip to Florida – and was wowed from the minute he walked into the Loews Portofino Bay Hotel at the Orlando Universal Resort.

“It was really impressive, from the water taxis to the resort to the fact there was an opera tenor singing on the balcony at 6pm every day. I’ve worked at some nice places but not seen anything like this. Even the rooms were bigger than half of my house!”

Nick was just as amazed by the range of restaurants on Universal CityWalk. He’s already recommending his favourite, Brazilian steakhouse Fogo De Chao, to clients, and has endured some mickey-taking for his karaoke rendition of a One Direction song at the Rising Star bar, featured on Facebook.

“I tell all my customers about it; I’m awful at singing but I can jump around like an idiot,” jokes Nick.“It was refreshing to see there was a lot for teenagers and people in their early 20s to do, not just families.”

Nick was amazed by how much Universal Orlando Resort had changed since he visited as a 13 year old.

Some of the older rides, such as one featuring Jaws, had been replaced with new attractions or updated.

Fortunately, his favourite ride was still there – the Incredible Hulk Roller Coaster. “I must have done it four times,” admits Nick.

For Nick, the water rides were a big draw, in particular Popeye and Bluto’s Bilge-Rat Barges. “Whatever ride I go on I always sit in the seat that gets soaked. I love all of them!”

Even though he’s not a fan, Nick was just as impressed by The Wizarding World of Harry Potter ride, and having a personal VIP guide round the rides was the icing on the cake. This avoided the queues and gave them a potted history of each ride.

He adds: “Our guide Dianne had been taking Tom Cruise round with his kids the week before, and then she was stuck with us! She’s even added us to her Facebook page; she was one of the loveliest people I’ve ever met.”