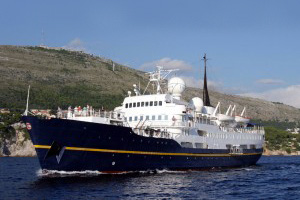 A small cruise ship ran aground in Oban Bay in Scotland yesterday evening.

The MS Serenissima, which was recently refurbished and is under charter to Noble Caledonia, is reported to have 112 people on board.

No-one was believed to have been injured in the incident.

The vessel was refloated in the early hours of this morning after it ran aground in Oban Bay. Divers will carry out underwater surveys of the vessel to ensure its seaworthiness.

An initial attempt to refloat the ship using its own engine, with a lifeboat pulling from astern, failed because of strong winds blowing the ship towards the shore.

High tide was not due until around midnight but it was hoped to tow the vessel off around 10.30pm.

An RNLI spokesman told the BBC last night: “The vessel is currently aground at the bow but still afloat at the stern.

“The initial attempt at refloating the ship used its own engine with the lifeboat providing assistance by pulling at the stern.

“Unfortunately this attempt was hampered by a strong wind blowing the ship towards the shore, and was unsuccessful.

“The lifeboat is now working with the crew of the ship to refloat it at a higher state of tide.”

The local Oban Times newspaper reported: “It would appear that the 87-metre MS Serenissima went the wrong way round a navigation buoy, as she encountered the MV Isle of Mull ferry, when she entered Oban Bay in Argyll from the north.”

The vessel was completing an 11-day ‘Great Gardens and Houses of Britain and Ireland” itinerary which left Poole on May 11.

The ship, which previously operated for Hurtigruten on Norwegian coastal voyages as the Harald Jarl, is scheduled to depart from Oban today (Tuesday) on a seven-night Hebridean cruise, according to Noble Caledonia’s 2013-14 Small Ship Cruising in Britain and Ireland brochure.