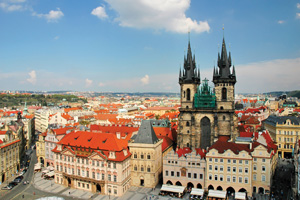 The mayor of Prague has advised against unnecessary travel to the city until a state of emergency imposed after severe flooding is lifted.

The city’s metro service is closed and road and rail links face disruption.

Some tourist sites such as the Charles Bridge are not accessible.

Vulnerable areas close to the river and hilly areas where there is a danger of landslip have been closed to the public, although river levels have started to fall in the Czech Republic capital.

The state of emergency was declared across large parts of the region of Bohemia due to widespread flooding following heavy rainfall.

There is a higher risk of water-borne diseases, including hepatitis A, salmonella, tularaemia and dysentery in the flooded areas, the FCO said.

Flood waters are now moving north and are expected to peak in several towns including Ústí nad Labem and Děčín along the River Labe.

“Check the latest information with the local authority or your travel operator before you travel,” the FCO advised.

River cruise lines have been forced to amend or cancel itineraries until the floodwaters subside, as previously reported by Travel Weekly.