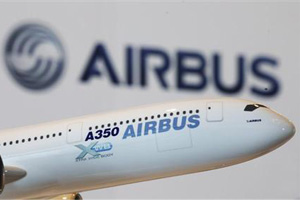 The aircraft designed as a direct rival to the Boeing 787 Dreamliner is due to make its maiden flight today.

The fuel-efficient Airbus A350 twin-jet is due to take off for the first time this morning from Toulouse, where the make is assembled.

The European manufacturer plans to start delivering the first A350s to airline customers by the end of 2014. More than 600 orders have been taken by Airbus for the new generation aircraft – still behind the 890 received for the 787.

The A350 is similar to the Dreamliner in that it is constructed largely of advanced materials, particularly carbon composites, in order to save weight.

Nick Cunningham, an aviation analyst at London-based Agency Partners, told French agency AFP: “All recent programmes before it, both by Airbus, Boeing and others, have had reasonably horrendous technical problems and delays.

“So every time you hit a milestone (such as a test flight), it’s good news because it means that you’ve missed an opportunity to have another big delay.”