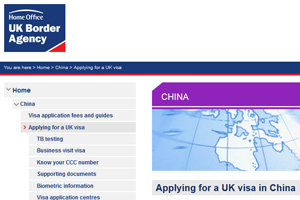 The Home Office has hit back at criticism of the UK visa process for Chinese visitors, suggesting the industry “stop knocking the UK offer”.

Immigration minister Mark Harper said: “We have a good visa service – and our customers agree.” Harper insisted it is “a misconception” that Chinese visitors struggle to obtain a UK visa.

However, he said: “I agree we should do more. I would like to reassure the industry we are committed to increasing the number of visitors from China.”

Travelzoo Asia Pacific head Jason Yap suggested last week that the UK has lost ground to other European destinations, in part because of the cost and hassle of obtaining a visa.

Yap told Travel Weekly: “Everybody else seems to be making visa applications easy but the UK hasn’t done much. People in China and other Asia Pacific destinations aren’t really talking about the UK anymore.”

But in a comment written for this morning’s Travel Weekly Business:am, Harper says: “The Home Office is running a good visa service in China.

“The facts speak for themselves – almost 300,000 visas were issued in 2012 with the vast majority processed in 15 days and around half in just five days. Our customers in China are happy, with 99% of those surveyed saying they were satisfied with the service.”

The minister added: “In the last few months we’ve made considerable improvements to our visa system.” However, he said: “Despite this work, the misconception that it is ‘hard to get a visa’ has become commonplace.

“This neither benefits the travel trade … nor the government trying to instil confidence amongst customers in our visa system.”

Harper said: “I want to work with the industry to close the gap between perception and reality. We need to make sure the UK’s visa system is portrayed accurately, in the UK and overseas, as a service that is continually improving to meet the needs of Chinese visitors.

“We also need to move away from focusing on simplistic and unworkable solutions for visas, for example joining up with Schengen. Compromising the security of our border is not something this government or the British public want.

“We will continue to work closely with travel agents and tour operators to find ways of streamlining the approach for applying for both [UK and Schengen] visas alongside one another.”

He insisted: “We are open to ideas.” But the minister added: “I’d urge everyone to stop knocking the UK offer and instead start shouting about all that Britain has to offer Chinese tourists.”