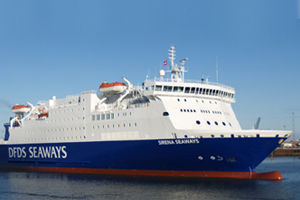 Sailings between Harwich to Esbjerg in Denmark have been suspended after a DFDS ferry with 489 passengers on board hit a quay while docking.

The vessel Sirena Seaways hit Parkeston Quay in Harwich as it arrived at about midday on Saturday.

DFDS said departures all week between Harwich and Esbjerg had been cancelled due to essential maintenance to Sirena Seaways.

“Our customer sales and service team are in the process of contacting affected passengers regarding the cancellations,” the company said.

The Marine Accident Investigation Branch said a team was at the port conducting preliminary inquiries.

Eyewitnesses spoke of hearing a loud bang as the vessel hit the quay at the port, the BBC reported.

The 23,000-tonne ship started to let in water and began listing to its port side.

The crew plugged the hole in the vessel’s hull from inside and built a compartment with watertight doors to stem the leak.

Lifeboats and coastguard vessels were launched and an RAF search and rescue helicopter was sent to the scene.

Police, firefighters and ambulances also attended but there were no injuries reported and no pollution.

DFDS are providing updates on their website regarding the affected route.