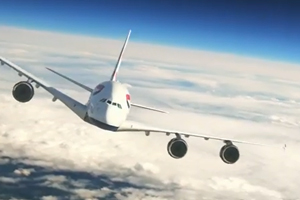 British Airways took delivery of its first Airbus A380 yesterday with chief executive Keith Williams declaring “the start of a new era”.

BA will use the 469-seat, double-decker aircraft on flights to Los Angeles and Hong Kong.

The carrier became the first in Europe to operate the world’s two most-modern aircraft after also flying in the first of its Boeing 787 Dreamliners last week.

Williams said: “We are delighted. These aircraft are the start of a new era for BA.”

BA will begin daily A380 long-haul services from Heathrow to Los Angeles on September 24 and to Hong Kong on October 22.

The deliveries are the first of a string between now and late 2014.

Williams said “Over the next 15 months we take delivery of new aircraft at the rate of one a fortnight as we put ourselves at the forefront of modern aviation.

“The A380 is a fantastic aircraft. Our customers are going to love the space, light and comfort.”

The carrier has previously operated an entirely Boeing long-haul fleet.

BA has configured its A380s with four cabins, 309 in economy, 55 World Traveller Plus (premium economy), 97 Club World (business class) and eight in First.

The Club World seats are split between the main and upper deck, which runs the length of the fuselage and gives the aircraft half as much floor space again as a Boeing 747. The A380 uses about 16% less fuel than a 747.

The big feature of the aircraft apart from its size and improved fuel efficiency is that it’s much quieter on take-off and landing.

BA crew will now undergo A380 training and familiarisation, with the aircraft then deployed on short-haul flights, including UK domestic services, for a period.

The airline is due to take delivery of another two A380s this year and 12 in all.

BA chose not to be an early customer for the A380 which began flying in October 2007 with Singapore Airlines. It thereby missed a series of manufacturing delays and subsequent problems which meant the 100th A380 was only delivered in March this year.

Qantas suffered an A380 engine failure in 2010 which led to the airline grounding the aircraft, and the world’s entire fleet had to be checked for cracks in the wing fittings last year.

BA took delivery of the first of 24 Boeing 787s last week, with Willie Walsh – head of parent company IAG – hailing it as “a tremendous, innovative aircraft”.

The 787 will begin flying BA passengers from Heathrow to Toronto on September 1 and to New York Newark on October 1.

The Dreamliner entered service in 2011 after being dogged by delays and was grounded for three months this year following a battery fire.

However, Walsh said: “The 787 will become a mainstay of the BA fleet.”