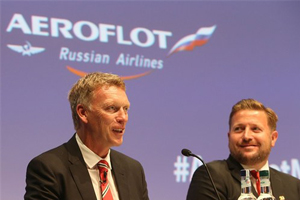 Aeroflot has been named as the official carrier for Manchester United in a five-year deal.

The partnership marks the club’s first commercial venture in Russia – an expanding market where it claims to have almost 18 million followers.

The agreement will see Aeroflot provide the English Premier League champions with strategic advice on travel for the team and club representatives.

Manchester United group managing director Richard Arnold said: “Manchester United and Aeroflot share several core values and we are pleased to be welcoming such a high quality company as a sponsor.

“Like the club, Aeroflot demonstrates team work, quality and a pride in its heritage, whilst still embracing new technologies and innovation.

“Aeroflot is celebrating its 90th birthday this year, but has already impressed us with its youthful energy.

“We look forward to developing a meaningful partnership with them and reaching our fans in innovative and rewarding ways.”