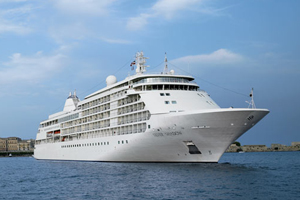 Staff on Silversea Cruise’s Silver Shadow made an “organised effort” to remove more than 15 trolleys of food to avoid inspection by health officers.

The ship failed its Centers for Disease Control and Prevention (CDC) inspection in June.

A detailed report published by the CDC has revealed the failings of the line, highlighting a number of cleanliness and signage violations.

After the report was published, Silversea told Travel Weekly that staff were receiving additional training.

The report refers to an effort to “physically remove over 15 trolleys of dry foods, spices, canned foods, cooked foods, mile, raw meats, pasteurized eggs, cheeses of all types, baked goods, raw fruits, raw vegetables, and a variety of both hand-held and counter model good equipment, pans, dishware and utensils to over 10 individual cabins shared by two or three galley crew members in order to avoid inspection.”

Silversea was advised that food operations were not to be conducted in rooms used as living or sleeping quarters and the CDC removed all potentially hazardous foods along with most non-canned foods.

Other issues noted by the CDC include “dirt and debris” accumulating on the deck under the storage racks in the walk-in fridge used for storing vegetables, dust and mildew on an evaporative condenser unit in another walk-in fridge and inaccurate acute gastroenteritis surveillance logs.

Inspectors found that the door to the pool grill pantry was kept open during service, giving access to flying insects. Other insect sightings were also reported.

Silversea previously apologised for the “shortcomings in Silver Shadow’s evaluation”, vowing to ensure the ship scores higher in future inspections.

A spokeswoman added: “Silversea has taken immediate measures to ensure that Silver Shadow retains the highest standards in all areas of it operations.

“These measures include additional staff training and monitoring, on top of the extensive training already in place, following an inspection by the US Government where Silver Shadow received an atypical score of 82, compared with higher results on previous inspections. The maximum achievable score is 100.

“Silversea is deeply disappointed by this specific and only unsatisfactory score and takes very seriously its responsibilities on passenger and crew health and safety.

“Silversea ships have achieved perfect scores of 100 on several VSP inspections, including the most recent inspection in April on board another ship in the fleet. All Silversea ships have comprehensive policies and rigorous training programmes in place to make certain its staff and crew implement best practice onboard.”