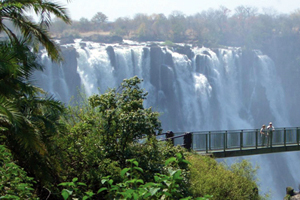 Ambitious plans by Zimbabwe to build a ‘Disneyland in Africa’ at the Victoria Falls have emerged to boost tourism.

The government would spend more than $300 million on the theme park, tourist minister Walter Mzembi told the BBC.

Zimbabwe is not leveraging the Victoria Falls enough, he said, describing it as a “sleeping giant”.

“It’s a wake-up call for us… we must build a new tourism facility with an impact,” Mzembi said.

“We think it should be modelled along the size and the kind of vision that is on Disneyland, including hotels, entertainment parks, restaurants, conferencing facilities. This is the vision and we need people who can run with it.”

The government already has plans to expand the Victoria Falls airport, saying it will invest about $150 million in the project.

Zimbabwe’s tourism authority said the country registered a 17% increase in visitors in the first quarter of the year.

Tourism is set to contribute 15% to the country’s GDP if the country remains stable.

Mzembi announced the plans at the UN World Tourism Organisation general assembly, which Zimbabwe is co-hosting with Zambia.

Zimbabwe is trying to rebuild its tourism industry after a decade of conflict and hyperinflation.

The decision to award the conference to Zimbabwe was condemned by human rights group UN Watch, citing reports of human rights abuses and election rigging.