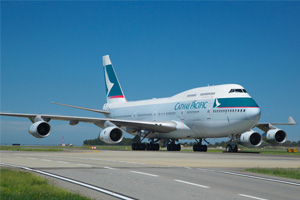 Cathay Pacific is opposing plans by Qantas to start a budget carrier in Hong Kong.

The Australian airline is seeking to create Jetstar Hong Kong as a joint venture with China Eastern Airlines.

But Cathay has lodged a formal objection to the application, claiming the proposal violates local laws and granting access would be detrimental to the city’s interests.

The airline argues that Jetstar Hong Kong does not meet the requirement that it must have its principal place of business in the city.

About half of Hong Kong’s traffic is controlled by Cathay and Asia’s biggest international carrier is seeking to defend that dominance while China’s economic growth slows, Bloomberg reported.

Cathay said: “The application would set a dangerous precedent by granting control of Hong Kong’s hard-negotiated sovereign air traffic rights to a carrier that is nothing more than a franchise operation controlled by a foreign airline.”