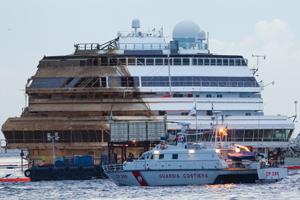 The hull of stricken Costa Concordia has been set upright in a salvage operation which took all of Monday and most of last night.

Franco Gabrielli, the head of Italy’s Civil Protection Authority, said the vessel was now sitting on a platform built on the sea bed.

Experts used cables and metal boxes filled with water to roll the ship onto a platform 20 months after it ran aground off the Italian island of Giglio killing 32 people. Two remain unaccounted for.

Engineers originally planned to complete the operation by Monday evening, but were forced into a three-hour delay due to a storm.

The procedure was carried out gradually to avoid further damage to the hull, which spent months partially submerged in 50ft of water and fully exposed to the elements.

The 114,500-tonne vessel will be inspected, prepared for repairs and refloated before being towed away to be dismantled.