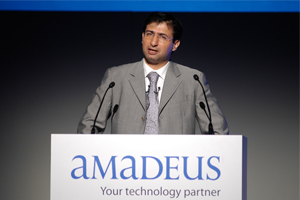 It was a reprise of his long‑held belief that the traditional distribution system is inefficient.

O’Leary supported his tirade with reference to how things were when Ryanair last used GDSs 20 years ago.

For Amadeus’s new vice‑president for Western Europe, David Doctor, the timescale was a key caveat to O’Leary’s criticism. He said GDSs had changed a lot in that time.

“This was a big change in the relationship between airlines and GDSs simply because a change in legislation meant we could negotiate,” he said. “We had to be able to find a way of being more cost-effective where there was an alternative, like online booking, and reflect the value of the network.”

Doctor conceded Ryanair’s dominance and short-haul focus in core European markets means it can shun the GDSs. On the other hand, low-cost rival easyJet has come to understand that embracing  the GDSs can help it to reach the corporate market.

Doctor rejected the charge that GDSs do not add value, or that they have not sought to provide airlines with the kind of retailing environment they say they want.

“We understand very clearly we bring different value to different parts of the business. Value pricing is a good example,” he said.

“The GDS world has come a long way. Twenty years ago it was issuing tickets; today it’s about a lot more than that.

“Presenting your offers to the consumer in the indirect channel involves a lot of technology; there is a lot of aggregation involved in that.

“If you do not want to compete in the aggregated market because you have a very powerful brand there is less value.”

With new forms of search technology reliant on huge computing power, Doctor believes Amadeus can solve clients’ IT challenges. Amadeus’s data centre in Germany is the largest in Europe, a prize asset it believes gives it a lead over rivals.

“We have the capacity to help because we have the processing power,” said Doctor.

Doctor believes technology and the GDSs are evolving too quickly for NDC to make a serious difference.

“Look at Iata’s roadmap for NDC: they are talking about getting something out by 2018. That’s not fast.”

Although a huge global organisation, Amadeus is increasingly aware of the need to localise its offering and provide follow-up service once it is delivered.

Doctor said: “One customer told us they felt like they were buying a Ferrari but no one taught them how to drive it.”