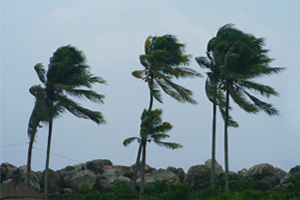 As many as 500,000 people were forced to evacuate their homes as a giant cyclone made landfall in eastern India.

Winds were measured at 125mph as Cyclone Phailin hit the coast near Gopalpur in Orissa state, at about 9.15pm local time on Friday.

Authorities had predicted a storm surge of at least 10ft that was expected to cause extensive damage.

Officials say they are better prepared than in 1999 when a cyclone killed thousands of people in Orissa.

The army has been placed on standby for emergency and relief operations. Helicopters and food packages were ready to be dropped in the storm-affected areas.

The storm has ripped up trees and road signs, and cut power supplies in some areas. There were reports of window panes being shattered and roofs being blown off.

Five deaths have been linked to the cyclone by Indian media, four attributed to falling trees and one to a house collapse, the BBC reported.

Reporter Andrew North spoke of a scene of apocalyptic devastation in Brahmapur, just inland from where the cyclone reached the coast.

Store signs and other debris were being pitched high in the air by storm gusts, while elaborate decorations for a major Hindu festival were strewn over the main road.

“You should keep up to date with local forecasts and warnings, and follow the advice of the local authorities including any evacuation orders.” the FCO said.