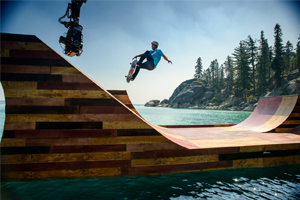 The £1.86 million campaign will debut in the UK on Boxing Day with two television adverts – one focused on mainstream visitors and one on the family market – which will run in rotation until February.

It signals a shift away from solely celebrity-led campaigns towards adverts which include notable Californians from other fields, such as Olympic gold medallists and professional surfers or skateboarders, although actor William Shatner will also make an appearance.

Brian Wright, senior director of communications at Visit California, said: “We did a lot of worldwide research and we found California is a place for dreamers.

“We’re showcasing people who have started from scratch and gone on to make something of themselves. We’re never going to move away from the celebrities completely, but it shows people that anything is possible here.”

The two adverts feature iconic sights such as the Golden Gate Bridge and the Hollywood sign, natural landmarks including the state’s national parks and giant sequoias, and its Pacific coastline. Further information on each of the filming locations and how to plan an itinerary around them can be found at visitcalifornia.co.uk.

Visit California is projecting a 0.4% increase in visitor numbers from the UK this year, from 665,000 in 2012, thanks to increased airlift from American Airlines’ new B777-300ER and British Airways’ new A380s which began flying from London to Los Angeles in September, contributing to a 4% rise in the number of direct flights from the UK to California’s three gateway cities, which now stands at 79. April 2014 will also see the introduction of Aer Lingus’s new direct flight from Dublin to San Francisco.