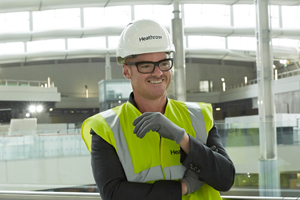 Award-winning celebrity chef Heston Blumenthal is to open a restaurant at the new Heathrow Terminal 2.

The concept and menu are currently being developed but will showcase his love for nostalgia and celebrate his pride of all things British, including much-loved and familiar dishes, according to the airport.

The new restaurant is due to open in June 2014 when Heathrow’s £2.5 billion Terminal 2: The Queen’s Terminal begins operations.

Blumenthal said: “This is an incredible project. There are so many different elements to consider when people are travelling.

“We want to deliver a broad spectrum of easy-to-enjoy, familiar dishes from fish and chips to pizza.

“When we made the ‘In Search of Perfection’ series we spent hours researching the temperature of a pizza oven or the crunch of batter; it’s this inspiration that is behind the menu at Heathrow – with some truly British eccentricity thrown in for good measure.”

The terminal will eventually serve 20 million passengers a year and be home to 23 Star Alliance airlines, as well as Aer Lingus, Virgin Atlantic Little Red and Germanwings.