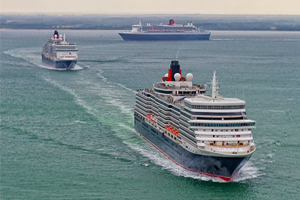 Liverpool is to gain a major boost with plans by Cunard to sail its three ships into the port for the first time in 2015.

The line is to mark its 175th anniversary with flagship Queen Mary 2 being joined by Queen Elizabeth and Queen Victoria in the city on May 25, 2015.

The three ships will sail close to the famous Cunard Building on the Pier Head, Cunard’s headquarters from 1917 to 1967.

QM2 will make a 10-night sailing from Liverpool on July 4, 2015 recreating the original voyage of the company’s first ship Britannia from Liverpool to Halifax and Boston which set out on the same date in 1840.

Details of the cruises that feature the Liverpool calls will be announced shortly.

When QE2 arrived in the Mersey for the first time in 1990 more than a million spectators turned out to see the ship. The 15 visits made by Cunard Queens since then have enthusiastic welcomes.

“Until 1967 the company was based in Liverpool, and it was from Liverpool that Cunard’s first transatlantic crossing was made.

“We are therefore delighted to celebrate our 175th anniversary in 2015 with two historic events in Liverpool: a meeting of our fleet of Queens on the Mersey in May 2015 and a repeat of the original transatlantic crossing to Halifax and Boston on July 4 2015. We look forward to announcing more details over the coming months.”

Liverpool mayor Joe Anderson added:  “To have the three Cunard Queens back in their spiritual home on our beautiful waterfront will be nothing short of majestic.

“This will be an unmissable spectacle which will attract worldwide attention and draw massive crowds.

“It is particularly fitting given our plans to bring the Cunard Building back into use as a cruise liner terminal and I am absolutely delighted by this news. Liverpool is once again making its mark as a great maritime destination.”