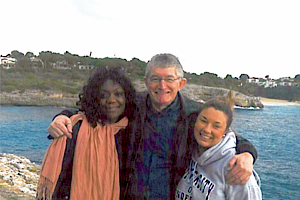 When Mike Bottomley Renshaw left his job as a travel agency manager to pursue a career in teaching, travel and tourism was seen as a “Mickey Mouse” subject.

Today, he believes it stands up as a subject in its own right against the likes of law and science in producing high-quality students for the travel industry.

This year he celebrates 40 years in teaching travel and tourism courses and 50 years in the industry, just as Travel Weekly launches its second Take Off in Travel careers magazine for students nationwide.

For Mike, the milestone represents a good time to pay tribute to those who put together courses and the institutions that produce industry newcomers.

“I feel honoured to have guided so many through to a successful and hopefully happy career,” he added.

It’s a far cry from what was on offer when Mike left school at 16 with no qualifications and took a job as a trainee agent with Thomas Cook in 1963.

“I had to go to London for three months to train as an agent. We stayed in a hotel and were hammered with travel geography,” he said.

A decade later, Mike decided to apply for a teaching role, and soon found himself teaching a class of 16 students. “After 20 minutes I ran out of anything to say and drew a map of the UK to do some travel geography!”

Mike taught the first full-time diploma in travel and tourism launched by the then Abta National Training Board at New College in Durham.

“We led the way,” he added.”We decided on the curriculum, working with agents and airlines, and it became Abta’s blueprint for travel and tourism.”

The early Diploma was developed into a Ordinary National Certificate (ONC), then an HND, and with Northumbria University, the college introduced a Travel and Tourism Management degree.

In 1991, Mike had a text book published called The Travel Agent, still in college libraries today.

Now 67, Mike is still teaching and working for exam awards body Edexcel, part of Pearson. “I love every minute of it,” added Mike, who has no plans to retire.

“My message to anyone in a similar situation is if you enjoy your job and you are still making a positive contribution to the education of young people then continue. My generation can make such a difference by passing on years of experience and knowledge.”