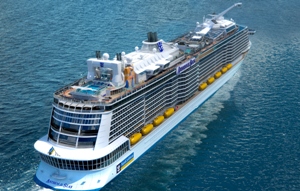 Royal Caribbean International is poised to announce that Anthem of the Seas will call Southampton home when it comes into service in spring 2015.

The Times’ website has this morning reported that the new Quantum-class ship will sail from Southampton.

Adam Goldstein, Royal Caribbean’s chief executive, is set to address representatives from the UK trade and press at a special event in London this afternoon.

The ship will go head-to-head with P&O Cruises’ Britannia, which will also sail from the port when it is launched in the spring 2015.

Speculation about today’s announcement has been building, with several blog posts throughout the past week pointing to the ship being based in the UK.

The 4,180-passenger Anthem of the Seas is being built in Papenberg, Germany.

In its article today, The Times said: “Unless the blogosphere has got its wires hopelessly crossed, it looks like Adam Goldstein, Royal Caribbean’s chief executive, will be announcing that Anthem of the Seas, a new Quantum-class ship being built in the Meyer Werft shipyard in Germany, will be operating out of Southampton when it’s finished in the spring of 2015.”

The article said Royal Caribbean is seeking to tap into the £2.5 billion a year spent by Brits on cruising.