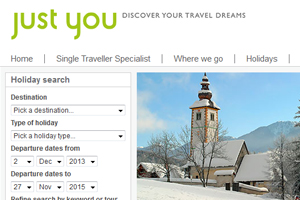 Single traveller specialist Just You has seen a 43% increase in trade sales since appointing an on-the-road sales team.

All Leisure Group gave its singles brand a makeover and introduced a broader product range earlier this year, with hopes of doubling sales over the next three years.

The tour operator has seen a 43% increase on sales through the trade year on year, group sales director Colin Wilson said.

Wilson said he believed more agents were realising the potential of the singles market.

“Having the sales teams out there meeting with agents has really had a big impact and we have noticed a big difference,” he said. “We are now 43% up for 2014 compared to 2013. Agents are realising the huge market of single travellers that they can tap into – and it’s a market that keeps growing.

“The fact we have broadened our products also helps; we have city breaks and that has been a great success.

“New York is our best-selling new break for Just You which is interesting for us. A consumer can easily book New York on their own and can sort it all out themselves, but they don’t want to – they want to come with a group of like-minded people.”

Just You has three sales executives on the road who report to Julie Franklin, group national account manager. The trade sales team has been in place since April.

Wilson added: “The message we keep saying to agents is that you might only be booking a trip for one person, but that is a person that will keep coming back and is also likely to book for three or four trips a year.”