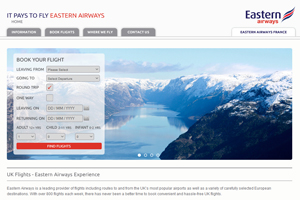 Eastern Airways is to replace Flybe on the Leeds Bradford to Southampton route.

The move follows Flybe announcing 30 route cuts starting in January including the service between Yorkshire and the south coast airport.

Leeds Bradford airport said it moved quickly to safeguard the link after learning of Flybe’s intention to withdraw from the route early next year.

Eastern Airways will start serving the route from January 20 with three flights a day on weekdays and one on Sundays.

The route provides access for people from the north of England to cruise ships that depart from Southampton.

Leeds Bradford airport aviation and development director Tony Hallwood said: “Southampton is an important route for the airport and the continuation of services linking Yorkshire with Hampshire will be welcomed by regional businesses.

“Leeds Bradford look forward to working with Eastern Airways to make this route a success and replicating the strong performance on the airline’s existing route from Leeds/Bradford to Aberdeen.’’